All Town facilities are currently closed to the public to mitigate the spread of coronavirus. Public Safety services will not be impacted by these closures.

See below for current project status and sign up to receive email updates regarding this project.

Over 20 attendees (14 signed in), including staff and Councilmembers, attended the Cascade Working Group meeting.

The meeting convened with introductions by Councilmember Hellman and Vice-Mayor Reed.  Chief Morin then briefed the  group on his department’s recent traffic enforcement efforts in the area. The summary data compiled by the Chief is available on the Town’s on the website: https://www.townoffairfax.org/cascade-striping-project/

After the Chief’s summary, the attendees were asked to individually share their feedback.  The audience seem pretty evenly divided among those in favor of the changes and those opposed.  Some attendees shared balanced feedback and represented “multiple parties”.

Below is a summary of comments received at the meeting and is not in any order of priority.  Please note that a speaker may have had more than one comment and the list  does not reflect the number of residents that may support a particular comment.

At the conclusion, residents asked the Town to create a “Community Education” mailer to address the following topics: Speed, Right of Way, Common Sense, Fog Lanes, Safety, Shared Space, and Community.  This should be a ‘feel good’ piece.  They wanted something to help bring the neighborhood back together as this issue has been divisive.

Below are two sets of data collected from our Police mobile radar sign.  The data is for the periods of Feb 18 thru February 24, and Feb 25 thru Feb 29.  It was collected in the new 15mph speed zone of Cascade drive and captured vehicles traveling n/b (into town).  This data, while accurate, is not an official “radar” survey which was done by the town’s Traffic Engineer after the re-striping of Cascade Drive.

2nd Chart show average speeds vs 85th percentile speeds – (meaning how fast 85% of the cars are going on average).

The “official” radar survey conducted by the Town’s Traffic Engineer showed the 85th percentile in this area to be 21mph which coincides with our data shown here.  We cannot cite drivers that are going at or slower than the 85th percentile.

While the attached data is not “official” as stated above, it is consistent with previous un-official radar surveys the Police Department has conducted over the years in various portions of Cascade Drive (before the changes).  In those unofficial surveys the 85% percentile speeds were also in the 20mph range. 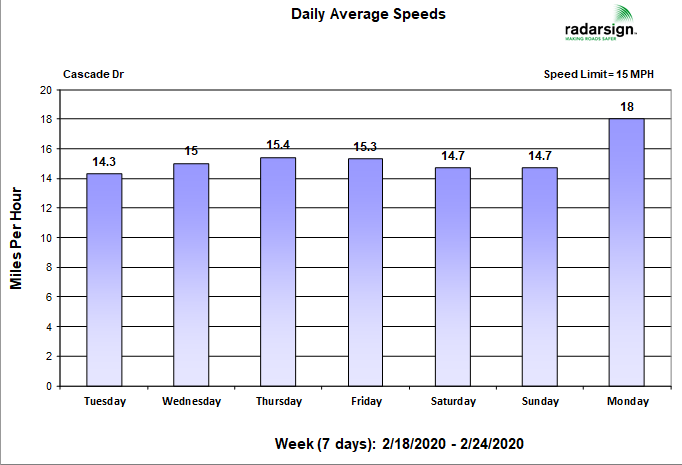 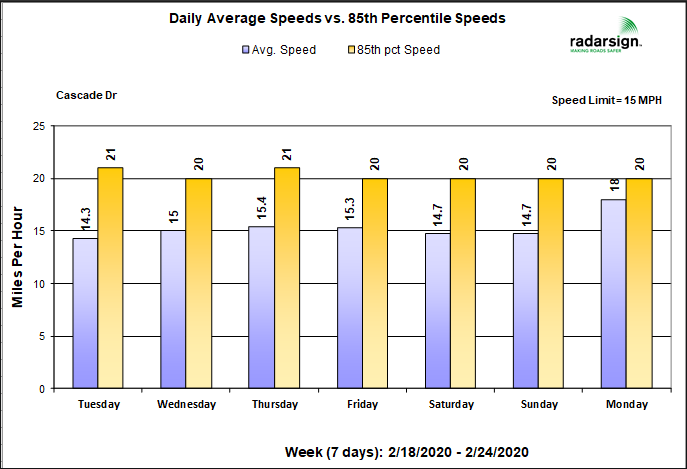 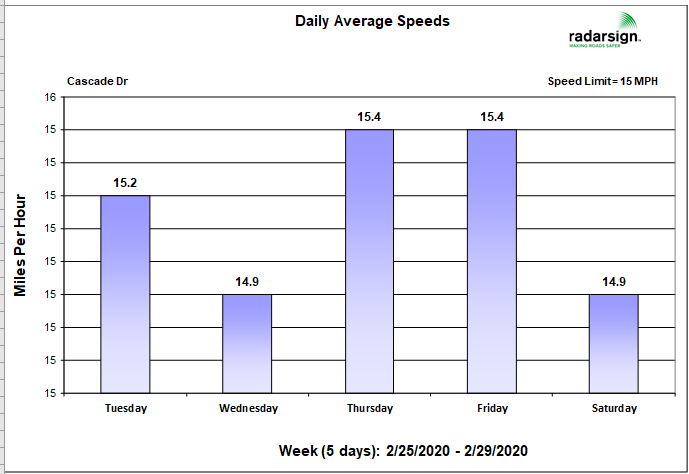 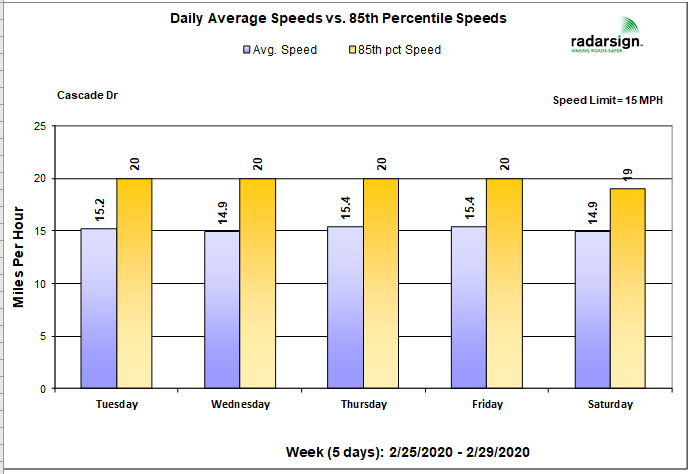 Below is a list of statistics of Stop Sign enforcement on Cascade at Laurel due to continued resident complaints about violators. As mentioned in a prior post these are mostly residents of the area. Of particular note, some of the violators we have stopped for failing to stop for the stop sign are ones who have complained of unsafe conditions or have requested increased enforcement.

Traffic citations are not the answer to this problem. As soon as enforcement slows down, people will revert to habits. This is clearly a problem at this intersection as it is at many other stop sign controlled intersections in town. The only positive is that over the past 20 or so years there have been no reported accidents at this location as a result of a stop sign violation.

2/5/20  TRAFFIC ENFORCEMENT – CASCADE DRIVE - Due to repeated complaints from residents of speeding cars on Cascade Drive, as well as stop sign violations at the intersection of Cascade and Laurel we have focused our attention in this area as we do throughout the entire town based on need or community concern.  While we have heard complaints that the police are never in the area, I can assure you we have had an increased presence in the area since the Cascade project began.  Just because individual residents may not have seen us, that doesn’t mean we weren’t there.  I’m sure many have seen us and appreciate the efforts.

While we have not observed any enforceable speeding issues, we have observed that many motorists are not adhering to the three stop signs at the intersection of Cascade and Laurel.  This is a common problem throughout town.  When we provide visible patrols (in marked police cars) in the area there is 100% compliance at the stop signs.  However when we observe traffic in unmarked police vehicles there is a definite lack of compliance.

As an example on a recent undercover survey of the stop signs for violations we counted 40 cars during a 15 minute period.  The results were:

21 came to a complete stop;

12 failed to stop at the stop sign and would have been cited;

7 came almost to a stop and would have been given a warning.

Other undercover surveys yielded very similar results. While we would prefer to not issue citations, the results of this conclude that there is an issue as described.  The violators are residents, friends or visitors to our community.   We generally cannot commit all our efforts in just one area for lengthy periods of time.  We just don’t have the staffing nor the time to do that.  It however is now time for Cascade and Laurel to get some focused attention.  Special enforcement may start as early as tomorrow. Due to the nature of the area, this will entail using police officers in unmarked cars making the observations and calling it in to another officer in a marked police car to stop the violators and issue citations.  Violators are often stopped quite a distance from the actual violation.  Just because you don’t see us at the intersection, doesn’t mean we are not there conducting enforcement. It is my hope that this advance notice will help gain compliance.  As stated, we would prefer our community adhere to the rules of the road and reduce resident complaints resulting in no need to resort to citations to gain compliance.  -- Chief Morin

1/31/20 UPDATE - Based on your feedback and Councilmember availability, the next meeting for the Cascade Working Group is scheduled for Saturday, February 8th from 10:00am to 11:00am in the Women’s Club.

1/21/20 UPDATE - With regard to the Council-approved revisions to be made in the Cascade striping area, the contractor indicates we’ll need to reschedule the work to the first week of February due to the weather. The contractor was hoping to perform the work this week, but the weather has not cooperated. Specifically, we need 3 days of dry weather after the rain in order to apply the thermoplastic on the roadway.  Unfortunately, the National Weather Service also forecasts rain “most likely” this weekend and a “chance of rain” next week. The contractor believes he will need 2-3 days to complete the improvements during dry weather.

With regard to the next Cascade Working Group meeting, Councilmember Hellman indicates a scheduling conflict has come up and she cannot attend a meeting on Saturday, 2/1.  We also believe it would be more productive to meet after the improvements to the Cascade Striping Area have been installed.  In terms of meeting dates, we would like to know if residents prefer a Saturday morning or would be open to a weekday evening meeting, say at 6:00pm.  We can provide pizza for the group since the meeting would be during dinner hours.  Please let us know by replying to this email. We’ll compile the results and let the group know of the preferences regarding a future Working Group meeting date.

Thank you for taking the time to attend the Saturday morning meeting on December 21. Of the 23 residents who signed in, 21 provided us with an email address. For now, we will refer to this group as the “Cascade Working Group” and I have created a group email by this name. (Note: I apologize in advance for any errors I may have made in entering email addresses).

The meeting began with Councilmembers Hellman and Reed welcoming the group and sharing their thoughts regarding the objectives of the meeting, which included a brief presentation from the traffic engineers and an opportunity for all attendees to comment on the project. Councilmember Reed also clarified that he misspoke at the December 18th Council meeting when he stated that a fatality had occurred in the area he referred to as “dead man’s” curve.  Police Chief Morin indicated that according to PD records, which goes back 20 years, no fatality has ever occurred in that area.  Anecdotally, no one in PD recalls any fatalities in the area.

After the Councilmembers’ introductory remarks, David Parisi and Andrew Lee, the traffic engineers from Parisi Transportation, summarized the changes to the project based on the direction received from the Town Council at its December 4th meeting. These changes included:

-- Remove the “25” pavement marking and replace with “15” mph markings

-- Reduce the regulatory speed limit to 15 mph prior to the traffic calming section of Cascade (i.e., two-way section).

-- Town staff reported at the meeting that we have painted some red curbs and are continuing monitor the situation to determine if additional no parking markings are required in the area.

At the conclusion of the traffic engineer’s presentation, residents asked questions and offered their comments:

As the traffic engineer is strongly recommending this minor revision to the striping project, staff will be asking the contractor who will be grinding out the 25 mph signs on the road to also perform this work which would be much more cost effective. We do not have a scheduled work date yet, but when we have an approximate date, we will let this working group know via email.

At this time, we are tentatively proposing Saturday, February 1st, 10:00am to 12 noon, for another meeting of the Cascade Working Group, but we will need to confirm that date. Staff is also working with the traffic engineer on the educational flyer to be distributed to the neighborhood.

At its December 4th  meeting, the Town Council, after receiving numerous public comments and considering options, directed staff to modify the Cascade Striping Project as follows:

The meeting to form the resident subcommittee is scheduled for Saturday, December 21st, at 10:00 am in the Women's Club.

At a Special Council meeting on Wednesday, 12/18, the Town Council will be receiving a status report on the Council approved modifications to the Cascade striping project and the formation of the resident subcommittee.

Council meeting on 12/4 --The Town Council will be discussing the Cascade striping project at its Wednesday, December 4th meeting. The meeting begins at 7:00pm in the Women's Club (46 Park Rd). The Council agenda for the meeting can be found at www.townoffairfax.org under public meetings by Thursday (11/28).

Update  11/19/19 --A neighborhood meeting is scheduled for 5:00pm on Thursday, 11/21, at Doc Edgar Park to discuss the project.  The matter is also scheduled for discussion at the Town Council’s December 4th meeting at 7:00pm in the Women’s Club.

The striping work being done on Cascade is an effort to create more traffic calming and to reserve a portion of the roadway for people to walk. The striping is intended to create “Two-Way” traffic sections of the road. The purpose of the TWO-WAY TRAFFIC AHEAD sign is to warn drivers travelling they are approaching a roadway section where two-way traffic is in operation, and that their ability to pass freely will be restricted by opposing traffic.  The narrower lanes provide a minimum four-foot shoulder area for people on foot.